In 1852 three Conceptionist priests (Frs Hickey, Bradshaw and Dutero) were sent to Camborne to care for the growing Catholic community, many of whom had fled the potato famine in Ireland. Their mission base was a store just north of the new railway station but in August a larger hay-loft over Mr Pike’s coach-house was fitted out as a chapel and it was here in September 1852 that Bishop Errington, the First Bishop of Plymouth, celebrated the sacrament of Confirmation for 36 candidates. Mr Pike was a director of several local mines and of the new railway where many of the Irish Catholics were employed. Although Mr Pike was a Quaker from Cork, his wife was a Catholic from Alsace; both were influential in founding the new church and Mr Pike later converted to Catholicism.

When the Conceptionists left the diocese, Fr Richard Mansfield from Stonehouse was appointed by Bishop Errington, on 16th October 1852 as first resident priest. He looked after the Catholics, not only of Camborne, but also Redruth, Truro, St Agnes, Hayle, Helston and the now vacant mission at Penzance!

On the 6th September 1857 Bishop Vaughan came and confirmed 39 in the loft chapel and recalled Fr Mansfield to fill a vacancy in the Chapter at Plymouth. He was succeeded by Fr James Carey from Falmouth with Fr Phillip Capron as assistant priest.

On the 10th December 1857 Mr Charles Andrew Reynolds, a local barrister living at Trevenson House, Pool, offered a plot of his land, measuring 71 feet by 155 feet in Camborne Vean (now Trevu Road) as a site for a new church. The offer was accepted on 21st January and the deed signed on the 5th April 1858.

Plans for a new church building were drawn up by Mr Freeman of Plymouth. Mr Harris, builder of Camborne, won the contract to build the nave and aisles with Mr Paull as foreman. The foundation stone of the new church was laid on 24th June 1858 by Bishop Vaughan.

The local Catholic community of around 600 had raised some £350 towards the total cost of building (£1000) and the church was completed and solemnly dedicated under the patronage of St John the Baptist on 26th May 1859 by Bishop Vaughan, second bishop of Plymouth. Canon Agar was the chief celebrant with the bishop preaching at high mass. Fr Mansfield (now Canon Mansfield) preached in the afternoon.


In April 1882 a minor argument between a local man, Mr Richard Edwards, and some Irish miners outside the Railway Inn, led to the ‘Camborne Riot’. Many homes of the immigrants in Camborne, Brea and Dolcoath were damaged and on 16th April the church was attacked, all the windows broken and the statue of Our Lady was rolled down the hill. On the 19th April the Home Secretary signed the order that the Riot Act was to be read and 100 soldiers of the Irish Regiment, stationed in Plymouth, and 200 policemen from all over Cornwall brought the situation under control. A collection was taken in the town to cover the repairs to Catholic homes and the church. The residue of the money was used to purchase a new statue of Our Lady. 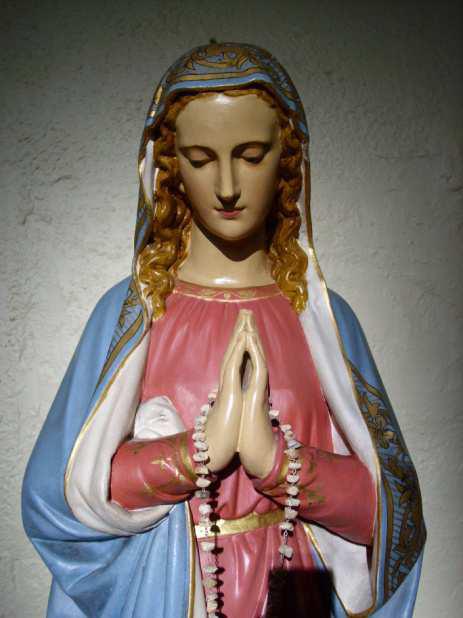 The Catholic church in Redruth was constructed in 1936. It originally doubled as a church hall with an eye to the building of a distinct church at a later date. However, it has since been developed into the simple, but fine intimate lay-out that is much-loved today. The patronal dedication to the Assumption of Our Lady was made well before the proclamation of the dogma in 1950.